How Tasmanians are transforming their mindset with Ritualize 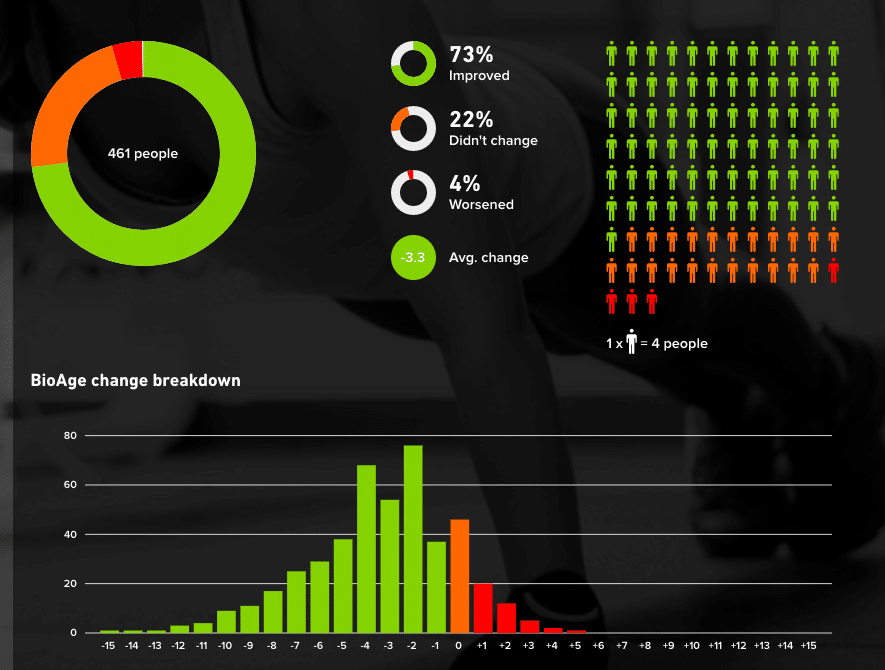 Since the program launched in November 2017, more than 5000 people across the state signed-up for the program, logging a total of more than 393,000 Rituals ( healthy habits ) so far. During this period, participants have taken part in two themed Quests. The first Quest (Ignition) was aimed at improving basic health literacy and taking a series of small, yet significant steps towards better health (e.g. increasing activity levels, eating better, drinking more water) while the second Quest – Think Better – targeted mindset and psychological wellbeing.

All participants begin the program by completing Ritualize’s proprietary and confidential BioAge health assessment. BioAge been used by more than 500,000 people around the world to get a scientific yet easy-to-understand measure of their overall health. Of those that opted to take their BioAge Assessment again at the end of the second Quest, 73% of participants had improved their BioAge score, reducing their BioAge by 3.3 years on average*.

Over the course of the four-week Think Better Quest, participants were encouraged to focus on mindset-related Rituals including logging gratitudes, practicing mental sculpting and spending more time in nature. Meanwhile they also continued with their chosen Rituals relating to physical activity, sleep and nutrition.

These results are particularly encouraging given the stark outcomes of the 2016 Tasmanian Population Health Survey where 30% of the population reported having been diagnosed with depression or anxiety at some stage in their lives (an 8.6% increase on 2009) and 13.7% feeling psychological distress at the time of taking the survey.

In addition to mindset outcomes, significant improvements were also reported in relation to other health areas including alcohol and vegetable consumption. On average, participants were reporting just 0.6 alcohol-free days per week at the start, but by the end of the second Quest, this had increased to 2.5 days. The most popular Ritual overall was ‘Veg-it-Up’ which means increasing your daily vegetable intake. This is good news given that the 2016 Health Population Survey showed that only 7.5% of the Tasmanians surveyed were meeting the minimum daily requirements.**

Healthy Workplaces Tasmania is a State Government-funded program and the first public-private partnership for health of its kind worldwide and the results further reinforce the significant impact the right workplace wellbeing strategy can make on the lives of its employees. Along with such health improvements come considerable cost savings for government and businesses in terms of reduced absenteeism, presenteeism and injury costs. The great news is that the improvements won’t stop here as participants can engage with Ritualize all-year round, with the next themed challenge – the Sleep Better Quest – kicking off on May 21.

Notes:
* 457 participants that chose to take their BioAge Assessment after completing the Think Better Quest.
**Based 2013 NHMRC guidelines.

About Ritualize
Ritualize is a leading provider of employee wellbeing programs and bespoke health assessments used by corporations, government and gyms across Asia Pacific, Europe and North America. Our unique approach focuses on helping people replace bad habits with healthy Rituals, delivering sustainable and tangible benefits to our customers and users.
www.ritualize.com